This is the first in a series of posts about Shenzhen. I am spending May-June-July 2017 in the city as a visiting scholar at Shenzhen University. 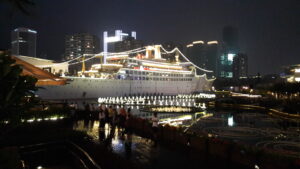 In one of our first few evenings in Shenzhen, we decided to visit the port area of Shekou (蛇口). Shekou lies on a strip of land to the west of downtown Shenzhen and has a reputation as an expatriate enclave and wealthy gated housing estates.

At the center of this zone is “Sea World Square.” There are no dancing dolphins or well-trained orcas here, however. What one does find, is a vast area of western-style bars and restaurants. Bars (in the American style) or pubs (in the British or Australian) are hard to find in the rest of Shenzhen, but here dozens of them sit side-by-side. Likewise, places to find non-Chinese food are few and far between in the rest of the city, but here one can find steaks, pasta, pizza, Thai, Indian, and so on.

At the center of this whole array of gustatory options is a man-made lake, criss-crossed by a number of low bridges, and a giant cruise ship (pictured above). The cruise ship (called Minghua, a French cruise ship purchased by China in 1973) is somehow permanently run aground into concrete “wharves” surrounding it. On the landward side, a hole has been cut into the side to form the entrance to a restaurant. Nattily dressed “sailors” patrol the surrounding area, inviting wanderers-by up to the deck, which has been converted into a Paulaner Biergarten. At 7.30pm, the lake in front of the ship exploded into music, laser light and choreographed fountainry — a sound, light, and water show to the tune of Whitney Houston’s “I will always love you.”

This setting and performance seems very familiar — Singapore’s Marina Bay Sands (an “integrated resort complex” including a casino) towers over a man-made “bay” and offers similar (and no doubt similarly priced) restaurants and bars to wealthy Singaporeans and foreign visits. There too, at 7.30pm a sound, laser, hologram, and water show (called “The Creation”) is beamed outward from the towers of the casino’s ship-shaped upper deck.

No doubt this resemblance is not a coincidence. Both cities ultimately aspiring to attract the same crowd of educated, wealthy, globally mobile, cosmopolitan denizens. Both are aspiring beneficiaries of the forms of globalization carried by educated elites. More than that, Singapore is an important model for Shenzhen (see Jun Zhang’s article on Singapore’s influence). This manifests in multiple ways, but here it is made strikingly obvious through the organization and performances of space in Shekou and Marina Bay.

But the particular nautical motif here is also important. Singapore is of a place built on and around its port. It has made, and continues to make, a large part of its wealth through shipping. Moshe Safdie, the architect of Marina Bay Sands, recognized this in his design. The ocean also links Shenzhen to Singapore — many migrants, seeking their fortunes, left Guangdong and other parts of southern China on boats, arriving in Singapore in the nineteenth and early twentieth centuries. But ships are particularly important for Shekou. Beginning in 1979, Yuan Geng led the development of Shekou as a facility for ship-scrapping and shipbuilding. This became the basis for the Shekou Industrial Park, in turn a sort of pilot project for the Shenzhen Special Economic Zone. The success of shipbuilding formed the basis for Shekou’s development and reform in the 1980s (see Ezra Vogel’s foreword to Learning from Shenzhen).

Ships, then, are a critical symbol for Shekou — it is a “sea world,” not only surrounded by the ocean but relying on the ocean for its development. The ocean (and boats) also connects Shenzhen/Shekou to its global economic ambitions: the territory of Hong Kong lies just across the water from Shenzhen, and a ferry connects Shekou directly to the terminals at Hong Kong International Airport. Global travellers can check into international flights in Shekou, clear Chinese immigration, and sail off to their departure gates.

The ship standing at the center of Shekou/Sea World — although itself stationary (and land-locked) — makes clear Shenzhen’s aspirations for mobility, development, and global reach.